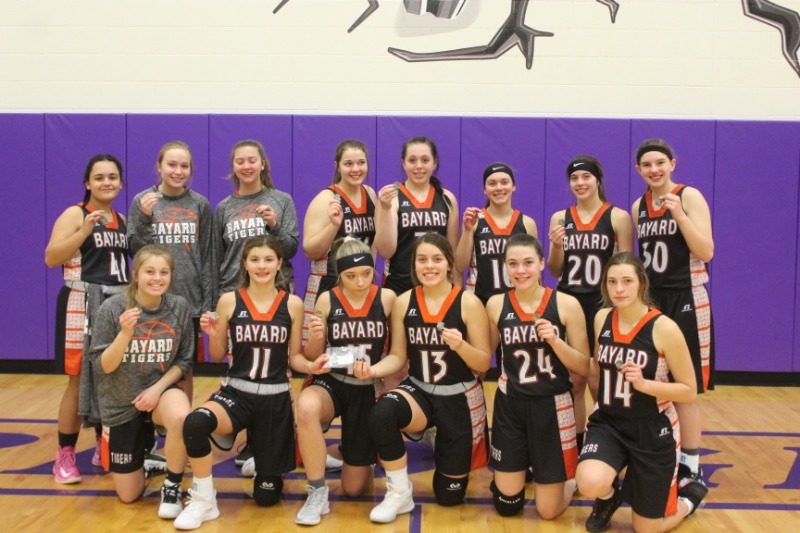 By Rylee Sharp
The Bayard boys beat the South Platte Knights in the MAC finals Saturday 44-32. Ben Sauer led the team in points with 19 followed by Daemon Avilez with 12. Jack Kildow scored five while Ryan Liakos and Daeton Blanco both scored four. Daemon Avilez and Ben Sauer both led in rebounds with eight. Daemon Avilez led in steals with three. The boys have won MAC three years in a row.

By Grace Burry
On Saturday, January 25, the basketball teams traveled to Bridgeport to compete in the MAC championship. The Bayard Lady Tigers are runner-up for a second year in a row and fought hard while being down 9-19 in the first half. The Tigers cut the Knights’ 10 point lead to a five- point lead by halftime with some free throws from Kierra Miller at the buzzer. In the end, it was too much Knights and not even Tigers. The final score ended 49-53 and the Tigers fought back after falling behind in the first quarter. Leading in scoring were Grace Burry with 14 and not far behind was Rylee Sharp with 12. Hallie Cochran was next with nine points, while Jessica Whitebear and Miller both finished with five. Cambree Schmaltz and Tabbitha Muhr each had a pair.