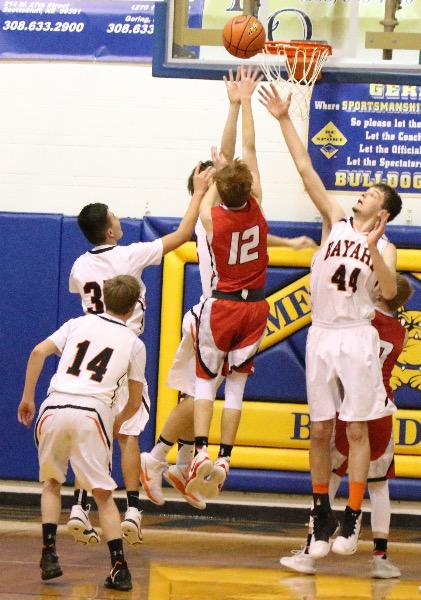 Boys gave everything during Sub-district basketball

Tuesday, February 20th was the opening round of sub-district games. Bayard took on Hemingford in Gering. The Tigers won 63-55. Justin Whitebear was the top scorer with 22 points, followed by Bryce Burry with 18 points, and Payton Oliverius with 15 points. Oliverius lead the team in rebounds with 12 and was followed by Lane Hargens with 8 rebounds. Senior, Bryce Burry, when asked how he feels knowing this was one of his last games said, “It sucks honestly. I feel robbed of a post season and I just love the guys I'm playing with so it really stings.”

Thursday, February 22 Bayard went to the second round of sub-districts against Bridgeport. Unfortunately, Bayard lost 52-56. Payton Oliverius lead the team with 19 points, followed by Justin Whitebear with 10, and Bryce Burry with 8. Oliverius also lead the team in rebounds with 12, followed by Lane Hargens with 8, and Whitebear with 7 rebounds. Bryce Burry said the highlight of both games was, “The highlight of the Hemingford game was winning, the highlight of the Bridgeport game was when we had made like 3 of 4 threes in a row.”